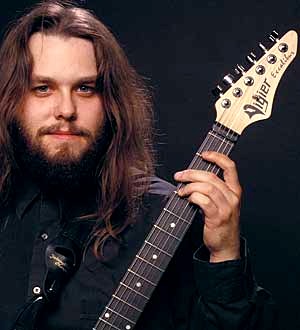 Shawn Lane (March 21, 1963 – September 26, 2003) Born in Memphis, Tennessee, Lane began playing piano with his sisters at the age of eight, but did not play guitar seriously until he was ten. At age 12–13 he began to practice heavily. At fourteen, he became the lead guitarist for Black Oak Arkansas (BOA) and alongside members, including drummer Tommy Aldridge, toured over the next four years opening shows for bands including REO Speedwagon, Ted Nugent, Outlaws, Cheap Trick, Molly Hatchet and Blue Öyster Cult. During 1979 Shawn played in The Streets, recording studio demos with Andy Tanas on bass, Chris Craig on drums and Jimmy Henderson on guitar, almost securing a deal with Epic Records. He was an American musician who released two studio albums and collaborated with a variety of musicians including Ringo Starr, Kris Kristofferson, Johnny Cash, Willie Nelson, Waylon Jennings, Reggie Young, Joe Walsh, Jonas Hellborg and many others. After studying the piano, he mastered the guitar, which he played with exceptional speed.

On March 21, 1963, Shawn was born in Memphis, TN. He quickly took up vocal, cello and piano lessons. By age 10, he was learning to play the guitar.

Where the Mississippi meets Mississippi sits Memphis, TN. In a land where music is reshaped every quarter century or so, Shawn Lane is at home. It is country large, liquid, and languid enough to take art and twist it anew. And Shawn does his share.

It started for the Memphis kid (born March 21, 1963) at age 4 by accompanying the vocal lessons of his mother and older sisters, playing cello in school, and taking piano lessons. He picked up the guitar at age 10, and realized he did a lot better on that instrument. Progressing very fast, he was playing blues rock in clubs around Memphis by the age of 12. His early highschool bands include Tyfoyd and Savage.

By the age of 12, Shawn progressed to playing blues rock clubs around Memphis and his early high school bands were “Tyfoyd” and “Savage”.

By 1978, the big buzz around town in Memphis was a 15-year old guitar prodigy named Shawn Lane. Southern boogie meisters Black Oak Arkansas set up an audition for Shawn, and hired him by the end of 1978. The first show BOA did with Shawn was in Kansas, on the same bill as Pat Travers. During 1979 the band played mostly bars and showcase rooms, and did some outdoor festivals. BOA also played at the inaugural party that Bill Clinton threw when he became Governor of Arkansas.

Shawn was hired to play in Black Oak Arkansas at the age of 15 and briefly played in a band called The Streets.

After BOA’s lead singer Jim “Dandy” Mangrum decided to call it a day and become an evangelist in late 1979, Shawn briefly played in a band called The Streets. This group, with former BOA bassist Andy Tanas on lead vocals, showcased at the Starwood in Hollywood and recorded some studio demos, but fell through quickly after passing up on a record deal with Pasha Records. Jim Dandy, Shawn, and drummer Chris Craig then reformed BOA, now featuring Shawn’s highschool buddies Kinley Wolfe on bass and Billy Batte on keys. BOA originally was a rowdy Southern Rock band, but by 1982 the final lineup sounded more like a fusion ensemble in the vein of UK and Return To Forever. Fortunately Jim Dandy had the sense to give his young band mates the freedom to showcase their talents between versions of Hot ‘N’ Nasty and Jim Dandy To The Rescue. However, although several studio demos were recorded over the years, a BOA studio album with Shawn never materialized.

At 18, burnt out from touring, Shawn settled down to widen and refine. While refraining from playing gigs, he immersed himself in books, movies, and records. In 1983, while in L.A., he played on a studio demo by former BOA bass player Andy Tanas. After his “sabbatical”, Shawn started playing with various bands round the South. The proliferation of his demos and recordings in underground tape trading networks made him a guitar hero without having released one single record. Mike Varney was the first to capture him on record: the 4th volume of Shrapnel’s U.S. Metal (1985) features a guitar solo by Shawn called Stratosphere II.

The Willys and studio work with others

Shawn’s group The Willys rattles the Memphis scene and by 1987 the group attracts the attention of some labels with their own original material. Shawn does studio work for many artists during the 80’s and led to a deal for his first solo album Powers of Ten by the early 90’s.

During the mid 80′s, Shawn rattled the Memphis scene with his own band, the Willys, famed for their Hendrix and ZZ Top covers. By 1987 the group had worked up some original material to play alongside the cover tunes and attracted the attention of some labels. But a combination of botched management decisions and bad timing prevented that from happening. Rock stars like Kirk Hammett and George Lynch, staying at the legendary Memphis Peabody Hotel while on tour, caught The Willys in the act and spread the word about Shawn’s amazing talents. He once mesmerized Billy Gibbons, who literally fell off his chair when hearing Shawn, and blew away Ted Nugent in an on-stage riff duel.

Shawn spent the following two years writing, arranging, and recording POT in his home studio. The album was released in 1992, immediately leading to a Best New Talent award from Guitar Player Magazine and a second place in the Best Keyboard Player category in Keyboard Player Magazine. To support his debut, Shawn toured the U.S. with his POT live band featuring Barry Bays on bass and Sean Rickman on drums. This group is captured live on the disc With Powers Of Ten: Live!, released in 2001.

In 1992, Shawn releases his studio album after much writing, arranging and recording. He tours the US with his Powers of Ten, Live! band and produces two instructional guitar videos, Power Solos and Power Licks.

After that he hooked up with DDT, featuring the sons of Memphis producer Jim Dickinson on drums and guitar and Paul Taylor on bass. They played many Wednesday night gigs in the Memphis area to shape up the material for what was to become Shawn’s second Warner Bros. album. However, it would take another couple of years for Lane/DDT favorites like Minarets and Nine=101 to see the light on CD.

During ’92-’94, Shawn also produced records for other artists (e.g. On The Way Home by David Ormonde Thomas and a Steve Harris album), was involved in teaching and developing curricula for conservatories in Europe, and made two instructional guitar videos. As 1994 was drawing to a close, Shawn teamed up with Swedish bassist to record Abstract Logic with drummer Kofi Baker. The duo played a beautiful set on drummer Michael Shrieve’s Two Doors album the following year.

On tour in the US, Europe and China

Shawn extensively tours the US, Europe and China and plays on four more albums.

Shawn’s long-awaited second solo effort, The Tri-Tone Fascination, was finally released in 1999 through the newly established indie label . Not very pleased with the first master, Shawn decided to remaster the album and release a second version of TTF. This instantly turned the first release, with two extra tracks, into a collector’s item that easily outbids both POT releases. After parting with Sipe in the fall of 1997, Shawn ventured more and more into the realms of Eastern music. In late 1999, they were joined by Indian percussionist/vocalist V. Selvaganesh for a European tour. This trio’s latest disc, Good People In Times Of Evil (2000), presents the more ethereal dimensions of Shawn’s playing. Also released in 2000 was Doug Scarborough’s solo album Mood Du Jour, featuring Shawn on three tracks.

In 1999, Shawn establishes his own indie label, releases another studio album and by early 2000 was gigging with the Time Bandits, a Memphis band.

In 2001, several planned releases, including Shawn’s David Lynch tribute Inside A Dream, a Lane/DDT live album, and the long-awaited re-release of POT, were shelved. Shawn also suffered serious health problems during this period but made a quick recovery and soon started gigging with the Time Bandits, a Memphis band.

By 2002, things were looking up again for the Memphis Monster: he and the Swede reunited with Jeff Sipe for club tours in the Southeastern U.S. and Europe, playing a mixture of their heyday material and Eastern rags. The latest Bardo release Icon is the first studio recording of Hellborg, Lane and the Vinayakram Brothers (also known as SULUH) and captures the beautiful music that was brought to the European stages in 2001.

Before Shawn’s death on September 26, 2003, one of his long-cherished dreams came true: he traveled to India for a short tour. In every city they played, they were hailed as true rock stars.

In February 2003 one of Shawn’s long-cherished dreams came true: he, joined for the occasion by Italian drummer Andrea Marchesini, traveled to the Indian subcontinent for a short tour. In every city they played – including New Delhi, Calcutta, and Shillong – they were hailed as true rock stars. After the hugely successful Indian adventure a short European tour followed. In early September 2003, however, Shawn developed severe breathing problems and had to undergo various medical tests while preparing for a new album with Ginger Baker. He was expected to have to remain on medical oxygen for the remainder of his life, but passed away on September 26, 2003.